Swine Flu - impressions of the virus

How can CEOs benefit from a knowledge of viruses?

Maybe they can point to the flu strain's apparent capacity for both incremental innovation (genetic drift) and disruptive innovation (genetic shift) as an exemplar of good practice for use in an organisational setting. Its capacity to adapt and survive against threats to its existence is only marred by its propensity to kill off its hosts / customers too early in the relationship before infection can spread!

So, how does the human body adapts to survive without our even thinking about it? The following description shows how.

The immune system’s role is to identify the enemies that are attacking the body and then to destroy them. These enemies include foreign agents such as bacteria and viruses as well as our own cells that become defective.

You can see how in the diagram following. Follow the sequence 1 to 7. Note the potentially supporting role of "nutrients." You never hear that from the UK NHS; just the role of drugs, unfortunately. 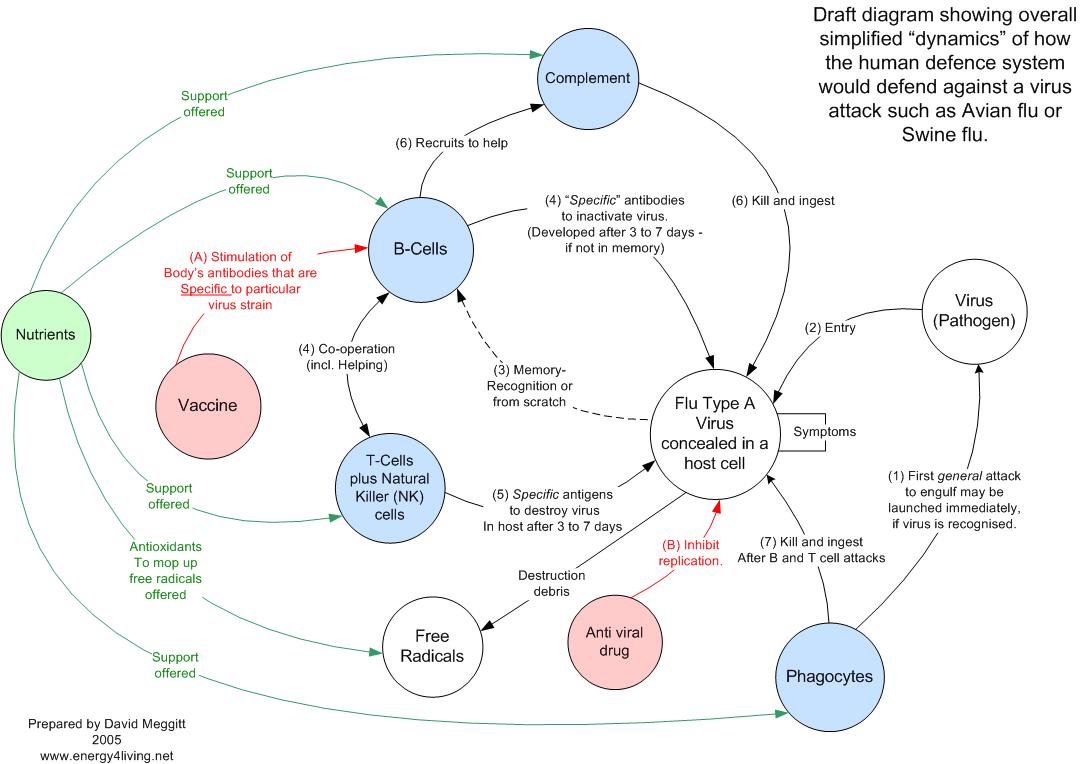 There are four levels to our defences: some of the main components are shown here.

Apart from our skin, the first level contains the digestive tract which lets in food, and the lungs, which let in air.

Within the digestive tract is the “gut-asssociated immune system”, which is programmed to prevent incompletely digested foods from entering the bloodstream and causing immune reactions and eventually allergies.

The nasal passages help to prevent unwanted agents from entering the lungs. Healthy, strong mucous membranes in the respiratory and digestive tract are the first line of defence against invaders.

Once inside the body, the immune system has an army of special cells to deal with invaders. These defenders differ in their function and territory. For example, some cells operate in the blood, keeping an eye out for invaders. The three main types of immune cells found in the blood, collectively called white cells, are B-cells, T-cells and macrophages.

B-cells or B-lymphocytes are produced in an antibody for each specific invader or antigen. When a B-cell comes into contact with an antigen it grows larger and divides into several cells which secrete specific antibodies that latch on to the invader. Antibodies cannot destroy bacteria or viruses, but they do give them a hard time. They stop bacteria producing toxins, and they prevent viruses from entering body cells. Since a virus cannot reproduce unless it enters a body cell and takes over the cell’s control centre, reprogramming it to produce more viruses, antibodies are a major nuisance for viruses. Antibodies also whistle up other, more belligerent members of the immune army, such as T-cells.

T-cells or T- lymphocytes are derived from the thymus gland at the top of the chest. There are three kinds: T-helpers, T-suppressors and NK (natural killers). NK cells produce toxins that can destroy the invader. T-helpers help to activate B-cells to produce antigens, while T-suppressors turn off the reactions once the battle is won. Normally, there are roughly twice as many T-helpers as T-suppressors. In AIDS the HIV virus selectively destroys T-helpers, resulting in too many T-suppressors which depress the immune system, leaving the sufferer susceptible to other infections.

At any time there are a small number of immune cells roaming the body. Many of the have only a short life: T-cells, for example, live for about four days. When an invader is identified, new troops are produced in the bone marrow and thymus and posted to other areas such as lymph nodes, the tonsils, appendix, spleen and Peyer’s patches. Lymphatic vessels drain into these areas, bringing in invaders to be destroyed. That is why lymph nodes, for example in the neck, armpits and groin, become inflamed during an infection. This means they are doing their job. Since the lymphatic system does not have a pump, lymphatic fluid is moved along by muscle movement – so physical exercise is important for lymphatic
drainage.”

Since anti viral drugs inhibit replication of viruses, there is no point in taking them until infected.

On the other hand, a vaccine stimulates antibodies to fight a specific strain - the body is given a memory of something it must fight. Get the strain wrong, or be behind a virus' mutation, it may become less effective, or even useless.

So, maybe a little bit of thought, using value networks, can reveal how an organisation of people can reconfigure for both incremental and disruptive innovation.

Please note the form of diagram shown above is not the same as a value network. Spot the difference.
There will be no prize for the answer. Knowing is enough.

Comment by David Meggitt on August 2, 2010 at 12:19
I add a write up of collaboration between NHS staff (UK), a patient and her son in co-creating a solution for combating the effects of a hospital super bug. The actual situation is described, complete with time line.

Lessons to be learned are added together with time line for an "ideal" situation.

The write up is here.